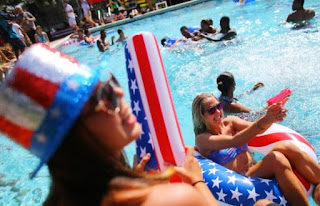 I knew it would be bad. I mean, hell, it’s 4th of July. The height of pool mayhem season, but I needed to swim. And when I got out to the deck of the Hilltop YMCA, things were pretty calm. Only one serene woman swimmer in the center lap lane. A couple of parent tots in the far lane. I was pleasantly surprised as I grabbed the empty lane farthest from the tots.

The water felt cool, refreshing. I needed this! I’d been sick with a heinous headache for days and today was the first day I was up and about. So, of course, the first thing I do is head for the pool. Even though it was a holiday.

And holidays at the Hilltop YMCA are notorious for pool pandemonium.

I got lulled into a rhythm nevertheless. Even with this knowledge. Swim while I can.

But the din started to grow. I stopped at the wall for a moment to change equipment, noting how the lifeguard had now taken out a lap lane and opened it up for more parent tots. I sure hope they had their swim diapers on. (But that’s another blog)

Today, I just wanted to get a swim in before more lap swimmers showed up now that there were only 3 lanes instead of 5.

A shy older gent stood at the deck as I came to the wall, “You wanna swim here?” I asked him. He nodded, climbed in gingerly, began a slow leisurely side stroke.

Okay, I can handle this as long as he doesn’t kick me.

But then the din grew. The lane next to me now had 3 swimmers, the serene woman now surrounded by mayhem as no one knows how the hell do circle swim at the Y.

I turned at the wall, ready to head back down the lane, when lo and behold, A Mammoth Man was spastically swimming right toward me. On my side of the lane! With no regard to my being in the lane. Did he just not see me? Was he just an asshole?

I stopped mid lane. Stood there, mouth open staring at him. “Excuse me!” I hollered as it was so loud now in the room. He stopped in time not to run into me. His Mammoth Self righteous self staring into me like I was the one who was in the wrong. “Did you tell him that you’re in the lane? That we need to circle swim?” I pointed to Sidestroke Man who continued so slide past me, oblivious. Of course.

Mammoth Man just stared at me. Confused? Arrogant? Hard to tell through my foggy mask. I beckoned for the lifeguard, “Hey, can we get some help over here?” Hoping he’d come and do his job, you know, referee the situation. 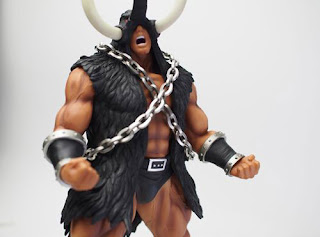 But Mammoth Man took great offense. “I don’t need any HELP!” he hollered at me. I stared at him, stunned, holding my comeback of “Well, sir, I beg to differ, but actually you need a LOT OF HELP!!!”

I said nothing though, as Mammoth Man shook his head at me. Oh so miffed. Women? Lap swimmers? Who knows what was going through his Big Thick Skull! “I’m getting out anyway!” he yelled at me.

I stood there, watching him swim past me and pull himself out. What the hell? He just got into my lane to stop me and have a confrontation with me to get out again? Why the hell didn’t he just get out from the walking lane where he’d been 10 minutes ago (Yes, I’d spotted him there earlier. I’d had an ickee vibe from him, but had ignored it. I should listen to my Pool Intuition!)

***
The lifeguard never came to check out the situation as it was happening but did come up to me later after Mammoth Man left, “Hey, I’m sorry I didn’t come over earlier. Is everything okay? I mean I saw him get out so I thought….”
His voice trailed off. Shit. Okay, yeah the lane offender had gotten out, but isn’t the lifeguard’s job to come to the situation as it’s happening?

“Yeah, it’s fine,” I told him. “I just don’t understand why he got in the lane only to get out.”
“I think he was confused,” the lifeguard said. “I’ve never seen him before.”
Yeah, I thought, that’s giving him the benefit of the doubt---confusion. I think he was just a big belligerent asshole who wanted to mow me down. Or didn’t see me? Or maybe he was confused, but hell, shouldn’t he be in a mental institution then? 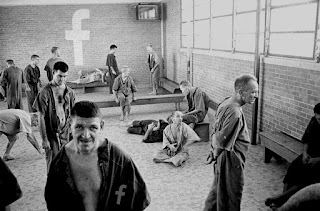 Okay, maybe that’s extreme, but you know, that’s how I feel when I swim on holidays.

I’m in a watery mental institution and there’s no way out…..except when you hit the wall.