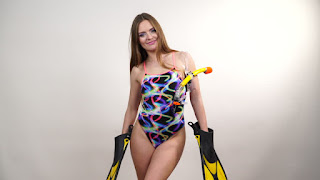 Stopping at the wall, I glance up through my foggy mask. A yellow snorkeled woman is making the circle swim motion with her hands, drawing ovals in the air with her index finger. “Can you guys circle?” she asks.

I hate circle swimming, but what are you gonna do, except ….there’s a situation in my lane.

“I’m happy to,” I lie to her, “but good luck trying to get him to stop!” I point at Maniacal Hostile Man, who has just turned at the wall in front of us, not stopping, completely ignoring the obvious request to circle swim. He had done the same thing to me when I’d tried to get him to acknowledge me upon trying to enter “His” lane. The lifeguard, though, uncharacteristically, had been on it. Had gone to the opposite side of the pool and stopped Maniac Man with his big red rubber guard thingee. Manic Man had stopped. Thrown off his cap. Gesticulated hostilely. Then had put his cap back on and swam back down the lane toward me. 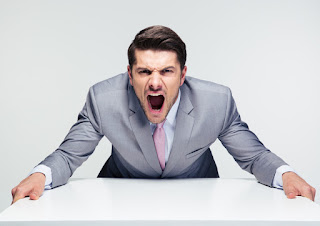 Did I really want to share a lane with this guy?
Nope.
But no choice. The Downtown Oakland Y pool was mobbed and his was the only spot where I didn’t have to circle swim.
He was a menace. Splashy and arrogant. How does this come across in the pool? Oh, I dunno. Maybe when he smacked me with his arm and didn’t even stop to apologize?
I tell Yellow Snorkel woman this.

“Oh, forget it,” she shakes her head. “I don’t need to deal with that!”
“Yeah, I thought of crashing into him back, but….” I shrug.
She glances down at my paddles lying on the side of the deck, nodding toward them, yellow snorkel in hand: “Those are pretty good weapons!” We share a chuckle.
She walks away. Gets into the pool, no problem, two lanes down. Sighing, I continue to swim in His Lane. Every couple of laps, I glance around, hoping for an opening, but no one is leaving. So, I’m trapped in Menace Man’s lane.

Finally he gets out. But not out of the pool. He’s shifted over to the Family Swim section since all the families have gone. There are two large yellow Rubber Duckies floating in the water. I’m kicking now, so I surreptitiously eye him as he separates the duckies by about 6 feet, placing his arms out wide to make a sort of corridor. Then he starts to make odd noises at the Duckies. I can’t really tell what they are. Nothing intelligible. Not words. Just guttural gurgling noises, then he runs through the ducky corridor batting them around. Then he stops and repositions them again to make another run.
It’s hard to describe. But it’s insane. 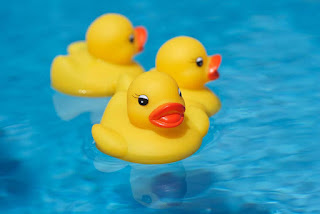 I have never seen anything like it. I think he’s got some Mental Issues with Rubber Duckies that I don’t really want to think about too closely.

After about 10 minutes, he gets out of the pool. He looks normal. Too tan middle aged guy in sorta good shape in a black Speedo with a good head of wet hair.
I watch as he leaves the deck.
And think, damn. I shared a lane with a Rubber Duckie Fetish Man?

I finish my swim, the pool calmer now that he’s gone.

Heaving myself out, I catch Yellow Snorkel woman’s eye. Go over to her. Report the Ducky Situation
“You’re not gonna believe this, but after he got out of the lane, he moved over to the family swim lane and started doing Something Strange with the Rubber Duckies.”

She looks at me for a moment, then grins, “Get out of here!”

“Yeah, it’s hard to describe, but I don’t think it’s normal. Beside the fact that he was such a jerk about stopping at the wall and communicating with other swimmers about sharing the lane. ”

She shakes her head, “Yeah, well, all we want is a Modicum of Awareness! And if it’s more than that, it’s a Happy Day!”
We both crack up.
I wish her a good rest of her swim as I turn to grab my stuff from its hook on the wall.

A Modicum of Awareness. Good phrase! I’m going to adopt this in my daily life: 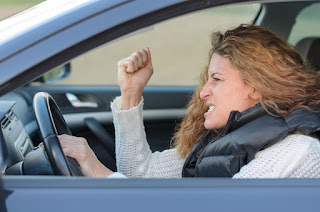 For impatient drivers on I 80 who tailgate.
For cellphone texters on Market Street who bump into me.
For hostile swimmers at the Oakland Y who have not even a Modicum of Awareness?

Before leaving the deck, I glance one last time at the family swim section, the two rubber duckies now floating serenely in the blue grey water.
Did I really see what I saw? Hear what I heard?
The Rubber Duckies bob up and down. One of them gives me a sly wink.....

A Modicum of Awareness?
Just ask the Rubber Duckies. 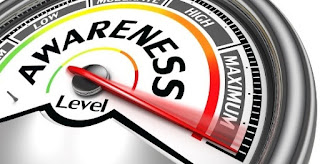