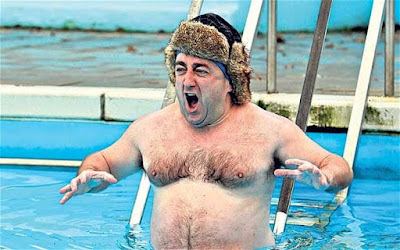 “Were you cold in the pool?”
“Of course!” Beautiful Indian Woman, a fellow Oakland displaced swimmer, gives a subtle shrug, standing in the Berktopia sauna, drying off.

“I know, right!” I exclaim. “It was freezing!”
Miss Gets Warm After 2 laps, smiles from the top shelf of the sauna. I’d asked her earlier if she’d been cold in the pool. “No, only for first 2 times.” Her English was some second language, but I knew she meant 2 laps of the pool.

Oh, I can’t stand people like this! I never get warm in cold water. And these people? They like it. It’s some sort of badge of honor. If they are cold (and often they won’t even admit this), they are only cold for the first couple of laps. And this is a good thing. It gets them going, you know?

Beautiful Indian Woman continues, “I don’t like cold water.”
“No, me neither,” I agree. “I don’t ascribe to the ‘No pain, no gain’ philosophy!”

They both laugh at this. Warmer now, I join DL at the lockers, wondering if I meant subscribe instead of ascribe. I’ll have to ask DL about this later. She’s the wordsmith. 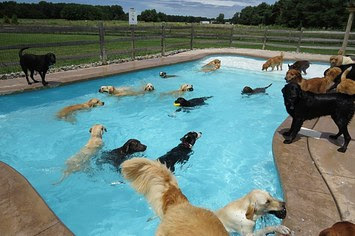 But back to the cold of the Berkeley Y pool! Yes, I know, I always complain about it whenever I’m forced to partake of its waters, but why oh why do they keep it so damn cold? It’s not like there’re tons of ‘super’ swimmers at the Berkeley Y. In fact, most of the ‘swimmers’ at Berkeley are middle aged overweight floppers. And while some of them can move surprisingly well in the water (the woman I shared a lane with did a sort of elegant dog paddle head above water with fins below stroke and kept up a good clip), most do not move through the water at racing speeds. 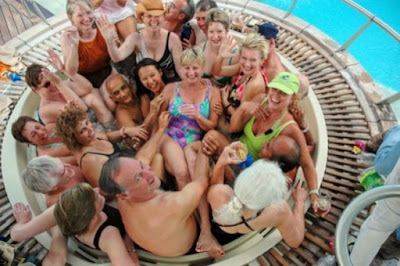 I lasted 40 minutes and was impressed with myself as I climbed into the crowded hot tub. Which made sense as the pool was so goddamn cold—everyone was in the Jacuzzi.

I snuck into the corner, momentarily upsetting a woman’s top of her water bottle cap situation--she'd left it on the deck and my hastily discarded cap, fins and mask touched it. “That’s my top,” she’d murmured. Not in a nasty way, just in a hand it to me way. Which I did before going on my rant about how cold the pool was.

She stared at me widely, her white towel turbaned head nodding. “Yeah, that’s why I go in here first. To get warm.”
“That’s a good idea,” I sink into the bubbled aqua heat. “I shoulda done that.”
“Some people say that if you go back and forth between the cold water and then in here in the hot water and then back again into the cold water that it’s good for the circulation.”
“Really?”
“Ummmm…. Some of them just do that all day. Back and forth back and forth back and forth.” She chuckles, amused.
“Well,” I grin, “I’m not going back in that Cold Pool!”
We both laugh as she heaves herself out of the Jacuzzi and heads for IceLand. 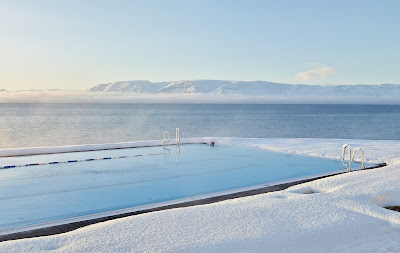 “Have a good swim,” I call after her.
“Have a nice rest of your evening,” she answers. Maybe knowing that no way was she going to have a good swim in that cold pool!

How many blog posts can I write about freezing cold pools? An infinite amount it seems. It’s like when Jon Carroll writes his car rants. He’s said it before: the driver who doesn’t signal; the tailgater who raises your blood pressure; the oblivious right lane driver who doesn’t let you merge onto the freeway. But every time he does, we, the readers, love it. That’s right! A woman did that very same thing to to me this morning! I was trying to merge onto 80 offa Barrett and this lady in a Subaru station wagon, completely oblivious, wouldn’t budge from her right hand lane either by changing lanes or hell, tapping her brakes to let me in, almost causing me to crash into her! 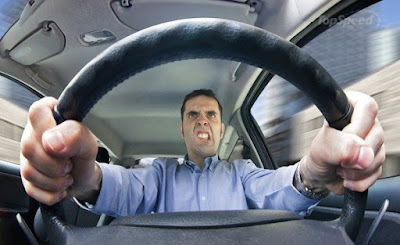 The jury’s still out, or maybe it’s in permanent recess, but in the meantime, thank goodness my regular WARM pools will be open again next week!

And when I see Beautiful Indian Woman in the pool at Oakland next week, we can exchange a knowing sigh of ‘ahhhh’ as we swim in the warm warm waters of Utopia!