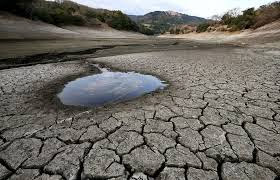 “Oh, Carol! I didn’t know you come upstairs!” Aurélie grins at me as I pull down spastically on one of the weight machines.
“I try to come a couple of times a week,” I say, glancing over at Ian who’s pulling his own weights. “How’s the pool?”
“Oh, it is good. Very good. You know? No one was in there today. I don’t know what is with that, I asked the lifeguard. Maybe it’s the weather?” Aurelie shrugs as only the French can shrug, glancing over my head at the couple working out on the leg machines. “That is my daughter. She graduated. She’s back now, with her boyfriend.” She gives a little frown, then sighs softly.
“Oh, that’s nice for you, isn’t it?” I ask.

She shrugs again. “I don’t know. Maybe….” Her voice trails off, distracted.
“She probably came to Californian for the weather,” I joke, vaguely remembering that Aurelie’s daughter had been at college somewhere back East.
“Yes, yes, that could be it.”
“Though with the drought now, the weather’s not so great,” I sigh, thinking about the pathetic little spritz of drops that fell on the back deck that morning. I counted them. 12.

“She got a letter to the editor published yesterday about the drought,” Ian says.
“Oh, really?!” Aurelie’s eyes light up. “My husband, he gets the paper, but yesterday?” she frowns. “It is in the recycling.”
“That’s okay,” I smile.
“What was it about?” she asks.
“Oh, there was this article about how the water agencies are setting up hotlines so that neighbors can snitch on each other if they see water waste. 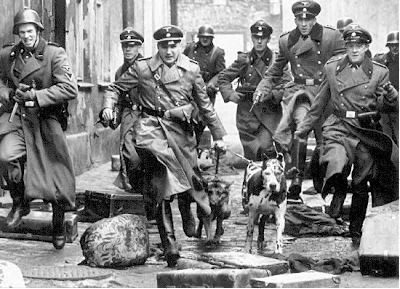 “OH!” Aurelie exclaims, disgust lacing her exclamation.
“I know, it’s disgusting,” I say.
“It is the Gestapo!” she proclaims, shaking her head.
“Big Brother, 1984,” Ian adds. 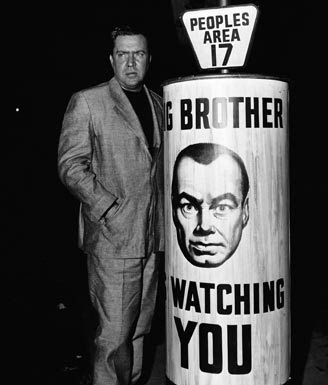 “Why don’t they just allot the water per person?” she asks.
“Yes, that was my proposal. So simple. Which is why I wrote the letter.”
“You, know,” Aurelie leans in close to me, conspiratorially, “I see these women in the locker room in the shower they take the shower for so long!” she harrumphs. “I take a shower, I dry off, I get dressed, I pack up and still they are in the shower!”
“Yes, I’ve noticed that too,” I nod.
“And sometimes….” Here she leans in closer, “I see they leave the shower on. They walk away. I turn it off.” 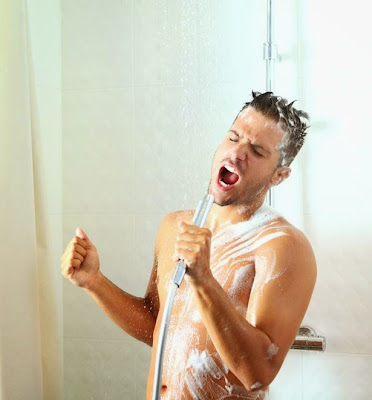 “And then sometimes, I am in the shower and the woman she is soaping up for oh so long and I want to reach around her and turn off the shower while’s she’s in it, but I don’t….” She clucks her tongue. Or do I just imagine this?
“Yeah,” I laugh, “that might be a little too intimate.”
“Too intimate!” she laughs. “Yes, you are right. But still, it makes me angry. I hear they are going to raise the dues here because of the water rates and then people will change.” She rubs her fingers together in the universal filthy lucre mode. “When they have to pay their money, then they will care.”

“Yes, that’s the only thing that will really change people’s behavior.” And I have to wonder, would I be so obsessed with the drought if I weren’t worried about my water bill? I keep hearing women in the locker room berating ‘renters’ and their water waste since they don’t pay the bill: “This guy, he’s a renter, washes his car twice a week! Can you believe it?” I overheard one afternoon as I was packing up to leave after my swim.

And the pool….I have this fear that if the drought continues, all the swimming pools will dry up. They won’t be allowed to waste all this water for such luxuries. How many 1000’s of gallons of water does one pool hold? And then you multiply that by all the pools in California, well …..it’s a LOT of water.

I hope that it doesn’t come to this. But it may. And if it does?
I’m moving. To somewhere where it rains all the time, filling the lakes and rivers and pools with abandon.
This would be paradise.
Oh, yeah, that’s right. Hawaii. Waterfalls. Oceans of fishes. Rain showers galore! 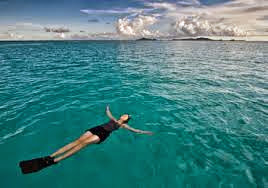 “You have a good swim,” Aurelie interrupts my Paradise Reverie. “I go now. Wait in the car for them.” She nods shortly toward her daughter and the boyfriend.
“Did you have a good swim?” the boyfriend appears by her side, grinning in youthful bearded sweat.
“Yes, yes, of course,” she answers. He lumbers away. She gives me the French eye, grins, and then disappears out into the lobby. 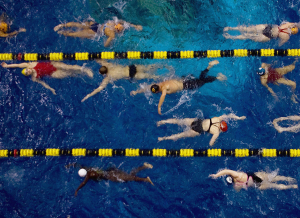 “I do not swim in straight line.” With an elegant little shrug and a beautifully sheepish smile, the swimmer I’ve asked to share a lane with makes this announcement.
What can I say? This is a first. Sure lots of swimmers at the Y don’t swim in straight lines, but most won’t admit it. (Or don’t know it.)

On the other hand, how do I share a lane with a Crooked Swimmer? 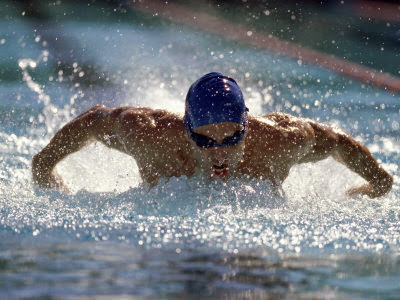 I glanced over at the lane I’d just vacated that was now completely awash in Butterfly Testosterone Situation. I can’t go back there, and so, I just smile at Crooked Swimmer and say that it’s okay. I can swim around her.

She nods, then ventures off in a shaky floaty stroke.

Shaking my head, I follow her. She’s not moving fast, so if we do run into each other, well, we’re not gonna end up in the emergency room. 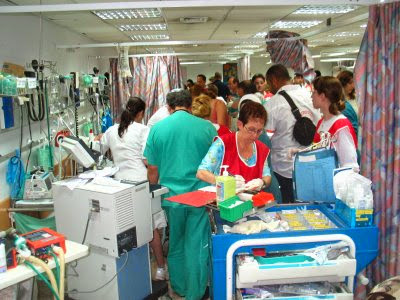 And we do run into each other. But this is later. For about 20 minutes, I think she’s making an attempt. I catch her at one point when turning at the wall and compliment her, “You’re not doing too bad with staying on your side,” I say.

Nodding, she gives a little smile frown. “You are so kind to say this. I think the lane it is very narrow.”

And yes, it is. All the more reason to make an effort right?

Which, like I said, she did, till oh I don’t know she got tired? She forgot I was there?

And so, we crashed gently into each other. “Oh sorry sorry,” she murmurs.

“It’s okay,” I nod, then try to get on with my swim. There’s only 20 minutes left and I’ve only done about 1200 meters. I’ll never finish at this pace.
Another crash. This time she doesn’t apologize. Just continues on, weaving up and down the lane.

I start to crack up as I glance over at Handsome Walking Man, who's been observing the situation, and is shaking his head.

“She did warn me that she doesn’t swim in a straight line,” I holler over at him.

He frowns, as he purposefully strides backwards, “That’s NO defense!” 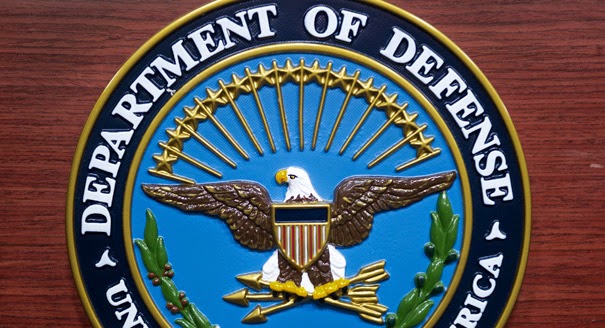 I chuckle in delight. He’s right, of course. We are at the Downtown Oakland Y. It’s the middle of summer. The pool is crowded with the usual suspects of screeching children, butterfly guys, and clueless couples.

So, again, I do have to give Crooked Swimmer credit for warning me ahead of time. And the way she said it made me think how kinda strange it is anyway to ‘swim in a straight line’. In other parts of the world, they don’t swim laps. I’ll never forget the first time I swam at a public pool in China -- absolute anarchy mayhem prevailed. Children screaming and jumping into floaty toys. Couples jumping up and down and laughing in delight. Random swimmers just stroking wily nilly across the pool in all directions. 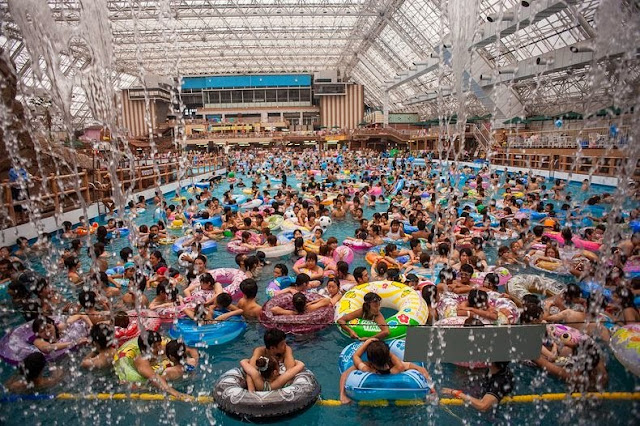 No one was trying to swim in a straight line.
Except for me.
And I quickly gave up and joined in the mayhem craziness that was swimming in China.

So tonight, I just had to laugh.
Sure, it’s no defense. We’re not in China after all.
But….for a little while as I swam around her, and then started and stopped, standing in amazement at her seeming obliviousness of her crooked swimming, I had to smile to myself.
Maybe I am swimming in China in Oakland.
At least for one night.
And that is Some Defense.