Hair by the Numbers 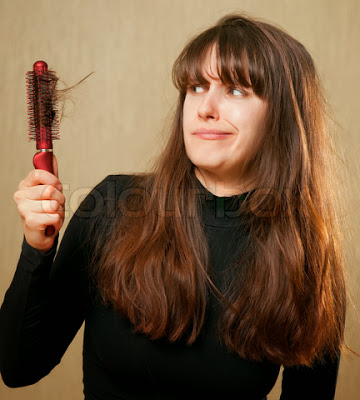 “Hey DL!” P yanks at another tangle before shoving a lock in DL’s face.
“Smell my hair! I used that Suave Coconut Conditioner yesterday and my hair still smells like it!”
DL takes an obligatory sniff, “I like that stuff.”
“Yeah, me too. At least the smell. It does have staying power that way. But it dries my hair out.”
“Really?”
“Yeah, I think so. Well, it’s hard to tell cuz swimmers have notoriously wrong dry hair anyway, but the Suave isn’t great for the moisturizing hair situation” (MHS). 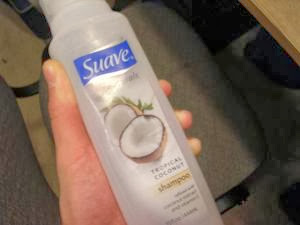 She nods, “I never knew that. I use the shampoo and I thought it dried my hair out, but now that you mention it…..” DL’s voice trails off. Lost in Hair Moisture Reverie Situation (HMRS)? “What kind do you use instead that’s better for the moisture situation?”

“Well, I got some huge tubs of Tres Semme conditioner, but it’s shitty too. Of course, I won’t throw it out; I’m too cheap. I used to use Finesse, but then I dunno…..”
P yanks at another tangle as the YMCA girl comes swooping through the locker room to collect towels, “5 minutes, Ladies! 5 minutes!” she hollers at them cheerfully.
DL rolls her eyes, “You know what you should do, P?”
“What?”
“You should find out what kind of Product is good for the Moisturizing Restoration Situation” (MRS).

“Yeah, that’s a good idea.”
“And you should find out the prices too. Like give us the Product from cheapest to most expensive.”
“OKAY! Good idea. And then I can put it on the blog!”
“Yah! Put it on the blog.”
And so, here P is writing the blog but without the full research product situation finished. Cuz to be honest, she tried, but it gave her a headache. All that Product. And then the prices? She never even got to that point.

She just found some funny pictures, which she’ll put on the blog and then she’ll do the price point research later. 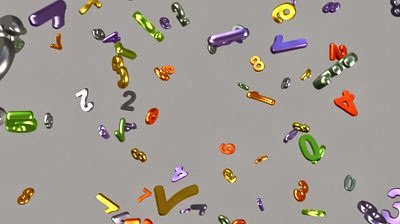 She’ll never do that. Numbers hurt her head. And her hair.
Do numbers hurt hair? How could that be? Can you just picture it? You’re standing in the pool and all of a sudden a bunch of numbers come raining down on the swimmers’ heads. 9’s and 3’s and 4’s and 7’s and then even two digit numbers like 22 and 77 and 88 and why are these the same number? They could be numbers like 34 and 59 and .... 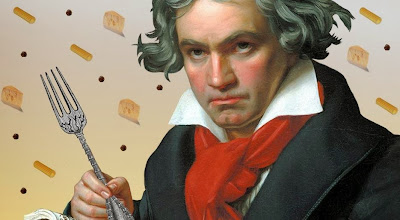 And then the numbers could also play music. The 5’s could play a phrase from Beethoven and the 2’s could sing out some Schubert.
Can you hear the numbers?

P can. But then, she’s got a vivid visual imagination when it comes to the pool. And her hair. And numbers?

Surprisingly, these too. She owes this to Suave, though, and her tangled mass of tresses.
Product anyone? 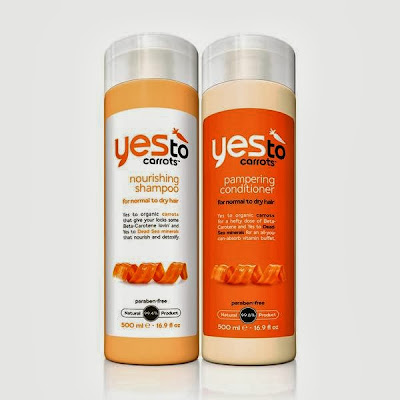 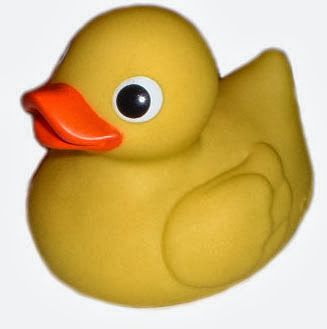 P surveys the scene from the deck for a few minutes. Mayhem. Sigh. What the hell were the kids doing still in the pool at 8:45 at night? Didn’t they have school now? Why were they still here, preventing her from any hope of a decent swim?

All the lanes have at least two swimmers, if not three. P refuses to circle swim at the Oakland Y. It is hellacious beyond words.

Standing forlornly on the deck, clutching all of her equipment, she curses the Oakland Y. Damn damn damn I hate hate hate this pool! she mutters to herself.

Then, lo and behold, she spies a swimmer stopping, removing his cap, preparing to climb out. A lane! Yes! Quickly, she scurries over to grab it before another forlorn swimmer soul gets in ahead of her.

“Mind if I share your lane?” she asks the super swimmer guy.

Politely he lifts his goggles, revealing a beautiful set of handsome guy eyes. You know the kind? Where the lashes are long and lovely, but he’s still a guy?

“No problem,” he smiles, shooting out a killer sexy swimmer vibe.

P slips her feet into her fins, trying not to be too distracted by Sexy Swimmer. Glancing down her lane, she notices a toy floating in the lane. The kids had thrown it in, obviously, and now it bobs gently up and down, small and sweet.

“I see, though,” P grins, pointing, “that you already have someone in your lane.”
Sexy Swimmer glances down the lane in the direction she's pointing, then gives her a sidelong smirk, “A Rubber Ducky?”

Laughing, P dips her fins into the water, “Yup, that’s what it looks like. I bet we can swim circles around it!”

He grins, pulls his goggles back down over his handsome eyes and takes off.
P hops in, swims up to the Rubber Ducky and scoops it up. But it's no Rubber Ducky....it's a Rubber Walrus.

A walrus means what? Hell, she has zero associations with walruses. Though weren't there a couple of walruses in Lewis Carroll's Alice in Wonderland? And weren't they zany and funny and well.....duh, if they were in this story, they'd have to be silly. 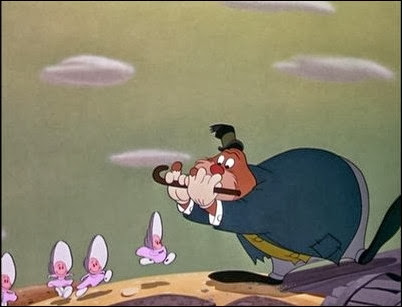 She'll have to do some research on this vague association. But for now, she
tosses it into the kids’ side of the pool, and dives under the water, noting how Sexy Eyes has already lapped her, Rubber Ducky notwithstanding.

Panties in the Coal Mine 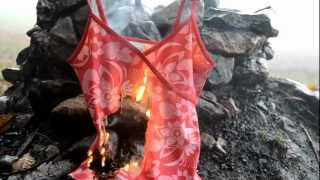 “What’s That over there in the corner?” P nods toward a mysterious square dark cloth laid out neat and flat on the top bench of Utopia.

“She’s drying it,” Sandy sighs, loudly. “I remember once I was at the Berkeley Y and this woman was drying her swimsuit in the sauna and I started to smell this horrible stench and said to her, ‘I think your Nylon is burning.’”

P and DL both chuckle. It’s a common theme in the women’s saunas of the YMCA. Women hanging their various clothing situations to dry.

“And these women that are always drying their panties in the sauna?” Sandy harrumphs, “I’d just toss a clean pair in my gym bag. Enough with the laundry at the Y.”

“Yeah,” P agrees, “I mean, how dry can those wet panties get in the sauna anyway?” P thinks about saggy droopy moisty panties and wrinkles her nose. But she has to laugh to herself about the Panty Theme for the day. That very morning, she’d been at a meeting, where the Chair of one of the Graduate Departments was going on and on about how her plumbing for her washing machine was clogged up and the plumber kept telling her it was her fault and she’d miffed at him and said, ‘Hell, do you think I just bunched up my panties and jammed them down the pipes to give you a thrill.” 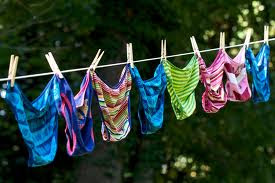 Did she really say that?

P isn’t quite sure now after her long day and arduous swim.

Sandy shrugs, “I dunno. I just remember that stinking nylon suit at the Berkeley Y and how surprised the woman was that her suit was burning up. Hell, it is nylon after all.”

P nods, “It does seem like it’d catch fire even.”

“That it could. That it could. Hell, that’s why they have the signs all over the place saying don’t hang your wet shit, excuse my French, on the sauna rods.”
They all share a giggle. Then sit in companionable Sauna Silence for a few moments.

“How was your swim tonight?” Sandy asks.
“Oh, pretty good. I shared a lane with a super beautiful efficient swimmer.”
Sandy nods in approval, “Very good.”
“Yeah, I was amazed. She was so smooth and fast. I could tell she was pulling really hard under the water and so when she stopped I asked her about her stroke and she told me about it.”
“What did she say?”
“She said that she was pulling out to the sides instead of under our bodies, like I thought you were supposed to.”
Sandy frowns, “The S shape, under and around.” She makes the S shape motion in front of her sweat beaded torso. 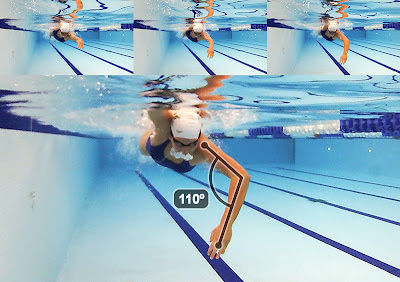 “Yeah, that’s what I thought too, but this woman, well…she was so fast…..” P pauses for a moment, thinking of Super Efficient Swimmer Woman. “I do hafta admit that maybe I got it wrong though. I had my earplugs in and I was super distracted by her beautiful eyes.”

DL laughs, softly? Or does P just imagine this?

Sandy continues to puzzle through the S Stroke Paradox, “I wonder what she said exactly?”
“If I swim with her again, I’ll try to ask and pay more attention to what she’s saying,” P offers.
“Yes, do,” Sandy advises.

DL rises, weaves out of Utopia.
“Ah, the Canary in the Coal Mine makes her move,” Sandy chuckles. “Guess it’s time we follow suit.” 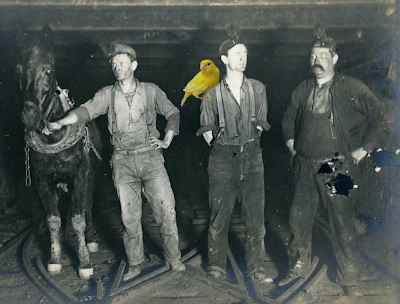 P tries to remember which story she used to teach that used this idiom. It was something famous and literary where the entire narrative was spun from this premise. There was an actual coal mine that the characters were all trapped in and the canary actually was sacrificed and it was horrible and sad and real all at the same time....

What was it? Something by Steinbeck? Or Nabokov? Or hell…..she can’t remember now. Maybe she’ll remember it tomorrow. 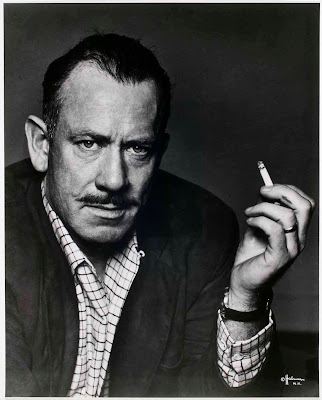 Exiting out of Utopia, P encounters Evil Eye Towel Woman heading into Utopia (She’d given P and DL the Evil Eye earlier in the hot tub—P didn’t know why, but could only guess it was because she was giggling at something DL had just said. No giggling in the Hot Tub! the Evil Eye seemed to be saying).

After a moment, Evil Eye emerged from the sauna with the ‘dry’ fabric that had started this whole story.

Of course it belonged to her. How else could the story end?

She gives P the Evil Eye as she passes by while folding neatly her damp square cloth. 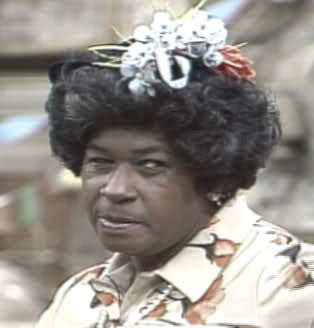 Proudly, she saunters into the steam room. P stifles another giggle, hurrying into the showers before it escapes into the steamy damp air.
at September 12, 2013 2 comments: