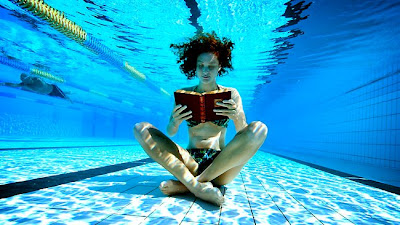 “Betcha can’t hold your breath underwater as long as me!” Maria Bello taunts Traumatized Child.
TC takes the bait, forgetting her trauma for a moment.
Pool Therapy. It works every time, esp. with Maria as the Therapist.

Maria’s eyes gleam, her sleek head wet from diving into the seedy motel pool. Before dunking under, she teases TC with one last challenge, “I was the Champion in my neighborhood for holding my breath underwater! Ready? 1....2.....”
TC smiles, engaged for the first time since her ordeal. The pool will do that. Make you forget for a little while.

“3!” Maria and TC dunk under the pool's shimmering surface at exactly the same time. Now the camera is underwater. Blue murky foggy white limbs flailing under the surface. Bubbles rising as both Maria and the child struggle to stay under. PP begins to count silently to herself as she watches the scene, riveted, on the bed next to DL and Owen Hill. One one thousand....two one thousand....three one thousand....
Maria and TC are still underwater.....facing each other in a breathless standoff. Their white flailing limbs eerie and other worldly.

24 thousand...25 thousand....PP continues to count to herself. Could the scene really be going on this long? Or is she back in Hacienda Heights, with her sisters, playing a similar challenge?

Maria pops up first, a split second before TC. She shakes her noble head, sputtering spray out and into the crisp cool air, the steam rising from the outdoor pool as TC pops up.
“Why would someone do that?” TC begins, loudly, poignantly. She’s not spoken since the event. “Why would someone kill my parents like that? Why would someone shoot them in the stomach in the head in the eyes?” she pleads, her eyes shinning, the wet drips beading on her forehead.

Maria takes her into her arms, enveloping her, “Shhh shhh....it’s okay. I don’t know, Sweetie. I don’t know why anyone would do that. But I’m going to find out. I can promise you that....Okay?”
TC nods, rests her head on Maria’s shoulder as Maria strokes her wet hair. 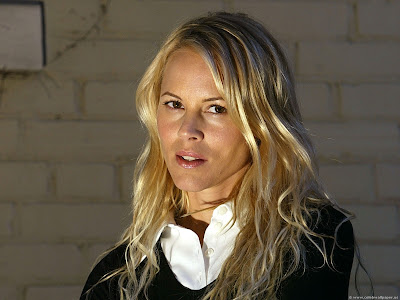 And PP, DL and Owen Hill sit on the bed, stunned. DL’s gf, RQ is silent. They’ve all just been witness to the healing power of the pool.

PP cracks a joke about this and they all laugh, relieved. It is, after all, only a TV show. Maria Bello plays a tough ass detective; the TC is a talented child actress; the bodies of her parents, bloody and lifeless, aren’t real.

But yet, the pool scene. It felt so real. The child hadn’t spoken until this scene. The trauma was too much for her. But Maria knew the answer. Go for a swim. Play a game in the pool. It’ll help. It’ll heal.

So, PP thinks, after seeing this scene, that this is what she needs. Pool Cure for her goddamn cold.

And so she gives it a try the next day. Swims her usual Hilltopia workout to the exercises of the Rusty Hinges and the tunes Nat King Cole. 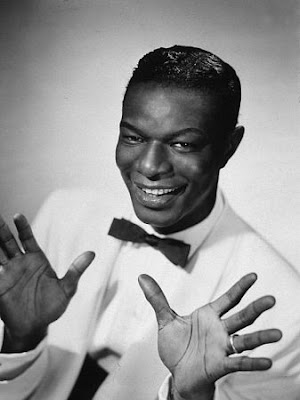 She feels better afterwards. As she knew she would. Pool Therapy. It works.
But then the next day.Wham. She’s sicker than ever.
Did the swim relapse her?

Or did she just need Maria Bello to swim alongside her? Egging her on. “C’mon, PP, it’s just a Cold! What’s the big deal? You’re not really sick! Hell, it’s not like you just witnessed a double murder in a NYC hotel room, now is it?”

Yup, this is probably the difference. If PP had had Maria by her side, she’d be better today. Or at least inspired. Which is almost the same thing, isn't it?
at November 20, 2011 3 comments: