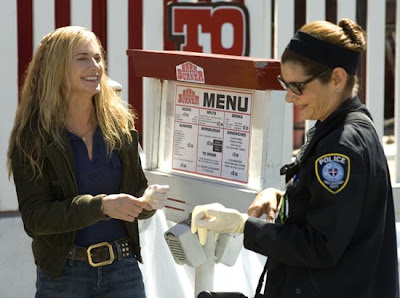 That evening, tuckered out in front of the TV, PP savored the discovery of yet another trashy t.v. show: Holly Hunter as a sassy trashy bleached blond detective in Saving Grace who while investigating the murder of a 99 year old gamblin man, had to tell her best friend how her husband had betrayed her. Then the best friend had the predictably teary, yet slightly warped, nervous breakdown during which she made Holly promise not to ever sleep with another Married Man, which PP thought was a bit unrealistic given Holly's obvious appeal.

At the muted commercial break, after all this intense dramatic dialogue, PP realized, unlike Holly, she hadn’t spoken to anyone all day.

Well, that wasn’t quite true. She had had a conversation with a composed young swimmer while taking a shower. Now PP is definitely NOT thrilled about the plethora of kids allowed to use the WOMEN’S locker room at the Hilltop Y. This is something that she’s appreciated immensely at the Oakland Y---no kids under 18 allowed in the women’s locker room. No exceptions. In fact, if any of those sneaky underage darlings did try to venture into the Oakland Y’s Women’s room, there was signage all over the place instructing Members to use the White Phone to call upstairs and have the infiltrators booted.

This is as it should be.

Yet, PP has been swimming long enough to know that kids rule often when it comes to pools, locker rooms and showers.

That was just a given. So, when this young lady stood at the entry to the showers calmly staring at PP in the shower (This is another thing PP hates—Kids that stare at the naked women. In the shower. Out of the shower. They stare. Of course, this is natural. But again, just another reason to keep them quarantined in their own lock rooms. ) 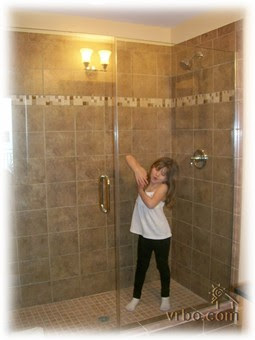 “Did you have fun in the pool?” PP asked, deciding chatting might be better than the stare down.
“Yes.” She nodded seriously, wrapping her Hello Kitty towel round her pink suit.
“What’s your favorite stroke?”
“The backstroke.”
”Ah.”
“And the …..” she paused searching for the correct term.
“The breaststroke, with the frog kick?” PP demonstrated with a kick in the shower, but then realized too late that this would only exacerbate the unwanted staring.
“Yes,” she nodded. “And the….” Again she searched for the word. What’s up with that? PP wondered. She can swim all the strokes but she doesn’t know the names of them?
“The freestyle?” PP offered, making the arcing arm motions in the shower.
Swimmer Kid nodded. “And the butterfly!” she announced confidently.
“Really? The butterfly? Wow. That’s a hard one.”
SK nodded again. 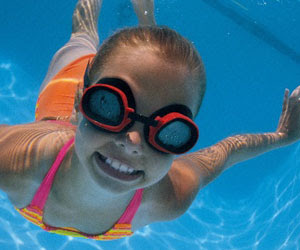 “You must be a really good swimmer!” PP smiled through the spray.
“Yes. I had fun in the pool.”
This seemed to signal an end to the dialogue. The kid had a natural storyteller’s knack for ‘framing’ her narrative.

“You can get in the shower now,” Mom bustled in, all business, instructing her daughter.
SK meekly obeyed, her attention now completely on Mom. PP was a distraction of the past.

Which was fine by PP.
Though at the end of the day, when PP looked back on it, she thought, there must be a story here somewhere with that Shower Staring Kid....

But only a slight one. Esp when compared to Holly Hunter's story. Who of course, in the end solved the murder, toasted her best friend's grudging forgiveness of her cheating husband, and polished off a basket full of barbecued ribs with her cynical boss before heading to the pool. 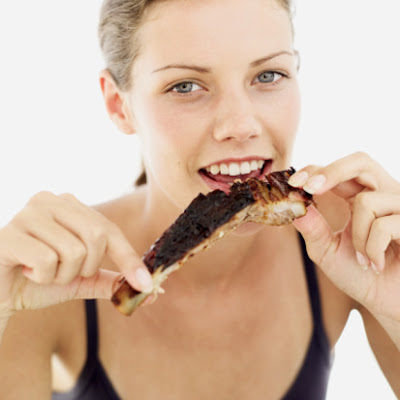 Holly does something and it must be swimming because look at her body! She's 51! I don't have cable. Waaaa! I want to see this show. I'll wait until it goes to DVD and rent it from Videots. Waaaaa!
Tangentially speaking, it's good to be back in the blogosphere. Thanks for the welcome. Swim on in stealth.