The Pool Plot for the Palace Hotel 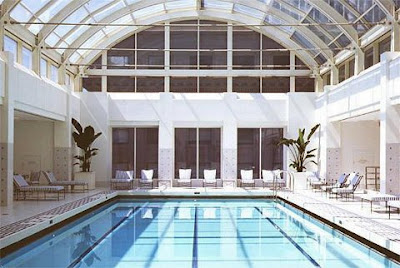 So PP got to thinking about this supposed policy she has about swimming in every pool that she discovers and you know what? It’s just not so. However, she can only think of one pool that she’s discovered that she hasn’t (yet!) swam in.

The pool at the Palace Hotel in downtown San Francisco.
Did you even know there was a pool in that fabulous old establishment?
Well, there is.

PP had discovered it one evening after drinks in the bar of the hotel with a colleague at FFU.
“Hey,” KP had exclaimed after a couple glasses of Pinot Grigio. “Have you seen the pool here?”
PP almost spit out her Cabernet Franc. “There’s a POOL here?”
“Yup. Wanna see it?”
“Are you kidding? Of course.”

And so, KP had gulped down her wine, paid the bill and off she led PP to the 4th floor, easy as you please. Like she owned the place. (Or the Palace.) PP really admires her friends that can do this. Waltz into any establishment, money and reservations aside, and act like they belong. No one questions them. Just cuz of their je ne sais quoi.

PP, on the other hand, while she has on occasion done this (sneaking into the Newport Beach Tennis Club Pool for example. But then, she was 16, very tan, blonde, in tennis togs—she could ‘pass’ for a member. Even back then, she was completely pool driven—so when she walked into the clubhouse lobby, smiled and grabbed a couple towels with a cheery ‘Hello’ to the handsome tennis instructor behind the counter—he just gave her a sexy grin and waved her in. No questions asked.)


Whereas here at the Palace Hotel?
PP definitely felt like a fish outta water!

It was so old money. All the chandeliers that would be laughable if it weren’t for the 1930’s art deco ceilings. All the long quiet corridors leading to lavish rooms where affairs of intrigue and high finance were going on behind closed doors.

PP didn’t belong at the Palace Hotel.
Unless of course she were in the pool. And after their ride up the gold-mirrored elevator and meander down the long carpeted corridor, upon first sight, she belonged in That Water.

“Cool, eh?” KP had sighed as they both stood outside in the hall gazing longingly at the utterly charming little pool, with white columns, turquoise blue fancy tiles, and a totally William Randolph Hearst feel to add to the enchantment of such a discovery. Who knew there was a pool here? Buried in the catacombs up here on the 4th floor right above San Francisco’s bustling downtown Montgomery Street arena?

PP had sighed. “I’ve got to swim here!”
KP had nodded. “Of course. Let’s see….” She glanced around at the empty hall except for the front desk guarded by a Serious Filipino Woman folding towels.
“Excuse, me,” KP had marched up to SFW, her tone easy and confident. “We just want to swim in the pool. Is there a day pass or some other way we can just go for a swim without being guests here at the hotel?”
SFW gave her an Evil Look. Why PP didn’t know. Was their request that outlandish? Didn’t swimmers come from far and near to swim at the hidden pool of the Palace Hotel?
Evidently not, as evidenced by both SFW’s glare and the lack of swimmers actually using the pool. (One lone businessman, on his cell phone, was lying on a lounge chair; a woman treading water in a floral cap was in the far corner of the pool.) No one else was anywhere. Wouldn’t you think that their request to partake of a swim would be welcomed?”

“You can pay for Spa Day,” SFW grunted.
“Great!” KP had grinned, winking at PP. “How much is that?”
”$99.”
“$99???” KP had scoffed. “My, that must be some spa day. Do you have a brochure?”
SFW reached under the counter, continuing her glare as she handed KP the brochures.
“Isn’t there a way we can just pay to swim?” PP asked. Hell if she was gonna pay $99 for a spa day. The pool was stupendous, but she drew the line at paying nearly a hundred bucks to swim!
“Spa day. Only way,” SFW turned, reaching for another stack of towels.
“Unless, of course, we were guests here!” KP announced cheerily.
SFW nodded, not even looking at them. She knew they weren’t guests! She could smell the lack of wealth and power and see the Bohemian Professor drunkenness in an instant. PP thought about how there was no way in hell they were gonna be able to sneak past her like she did at the Newport Beach Tennis Club.

And, so, KP had led her away from the pool, chatting breezily about how sometimes she and her husband stay at the Palace Hotel and so maybe they could arrange a guest swim. PP sighed inwardly, knowing this would never really happen. Why she couldn’t say for sure, but she’d been right. She hasn’t heard from KP for months now, and so another plot must be hatched if her mission to swim in every pool she discovers is to be realized.

Driving the Lovely I to Mills on Sunday, PP had mentioned this Mission and of course, the Lovely I had been intrigued. They’d been talking about the new Pool in Campbell that PP had discovered last week, and the Lovely I had nodded when PP said that she just had to swim, but didn’t know when what with her schedule and all.

“Of course, you must swim there,” the Lovely I had asserted. “That goes without saying. Why not swim at Lunch time?”
PP soaked this suggestion in. Sure, Lunch could work if she got there early and swam for a short time—after all the writing center at WWU was only 100 feet away. Maybe this would work.

But the Palace Hotel Pool? PP told the Lovely I about this one. “And so, I thought that I’d swam in every pool I’ve discovered but then I remembered this pool and damn! I haven’t swam there and I need to figure out how.”
Lovely I had nodded seriously. “Yes, I see your dilemma. The $99 Spa Day does seem exorbitant for a swim. Even for you!”
Giggling, PP turned left into the Mills Campus. “I did have this fantasy that I could just go the Palace Hotel Bar and pick up some rich smarmy businessman who’s only staying the night and telling him that I need a swim before we can have sex and then after my swim, just ditching him.”

The Lovely I let out a long series of “Hee heee heeees!”
“That’s a fantastic idea! You are so funny!”
PP nodded, laughing along with the Lovely I, always delighted by her enthusiastic giggles.

But could she really go through with it? It wasn’t like she was 16 anymore. Maybe the smarmy businessman wouldn’t go for her. Or maybe he’d just want sex first and then let her swim….

Umm….for a moment PP considered this aspect of the fantasy. Would the swim in the Palace Hotel be worth such a sacrifice?

Grinning, PP parked the car and turned off the engine, glancing around for her fins and Hello Kitty Kickboard.

Maybe, just maybe, if the smarmy businessman were cute.

Then such a sacrifice could be made.